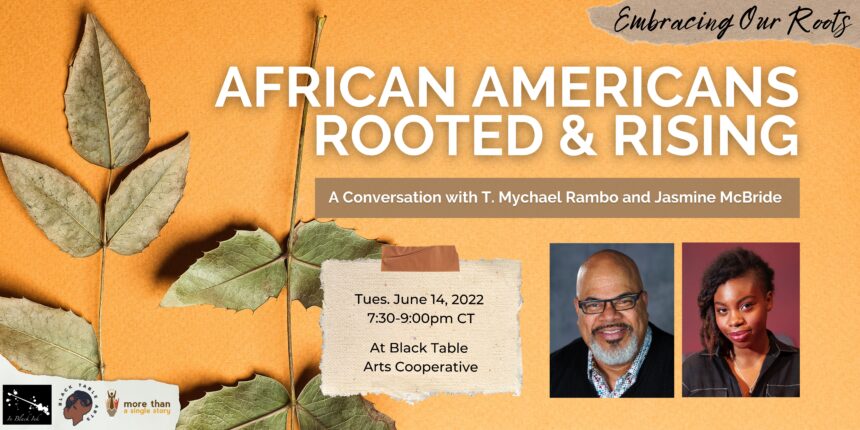 Embracing Our Roots is a conversation series that reaches back into the history of Minnesota’s African American arts community. The purpose is to pass this knowledge along to the new generation that is now ascending as leaders in our African American arts community. The series features Elders and Culture Bearers who engage with young leaders to discuss significant milestones in Minnesota’s Black arts history, and the impact that the artists and movements have had on our present day capacity to survive the storms and keep creating.

On Tuesday June 14, 2022, up and coming journalist, podcaster and spoken word artist, Jasmine McBride will join Emmy award winning actor, vocalist and educator, T. Mychael Rambo in a conversation about Mr. Rambo’s celebrated career here in Minnesota and beyond. They will also reflect on Ms. McBride’s growing career, and much more.

Embracing our Roots: African Americans Rooted and Rising is a collaboration with More Than a Single Story,  Black Table Arts and In Black Ink.

T. Mychael Rambo is a Regional Emmy Award winning actor, and vocalist. Whether acting with theaters like the Guthrie, Penumbra, Illusion, Ten Thousand Things, Minnesota Opera, the Ordway, and numerous others; or sharing his vocal stylings at local jazz clubs like the Dakota or Crooners; T. Mychael has made an indelible mark on the Twin Cities’ arts community. He has shared his performance talents nationally and internationally. Adding to his credits, he has done local and national television commercials, feature films, HBO mini-series, and other television programming. T. Mychael is also an accomplished arts educator, affiliate professor at the University of Minnesota (of 20 years), as well as a highly sought-after public speaker and committed community organizer.

Jasmine McBride, a dynamic and passionate storyteller, is an up-and-coming community leader from the Twin Cities of Minnesota. After traveling across the country consulting educators on education reform and turning to community journalism in the Twin Cities, Jasmine loves to explore social intersections through public engagement, community organizing, and art. Jasmine has paved her way into the worlds of journalism, film, podcasting and radio, and spoken word, working to travel the world and capture social intersections that rethink politics and societal norms.