Our Stories, Ourselves: Food in Cultural Celebrations 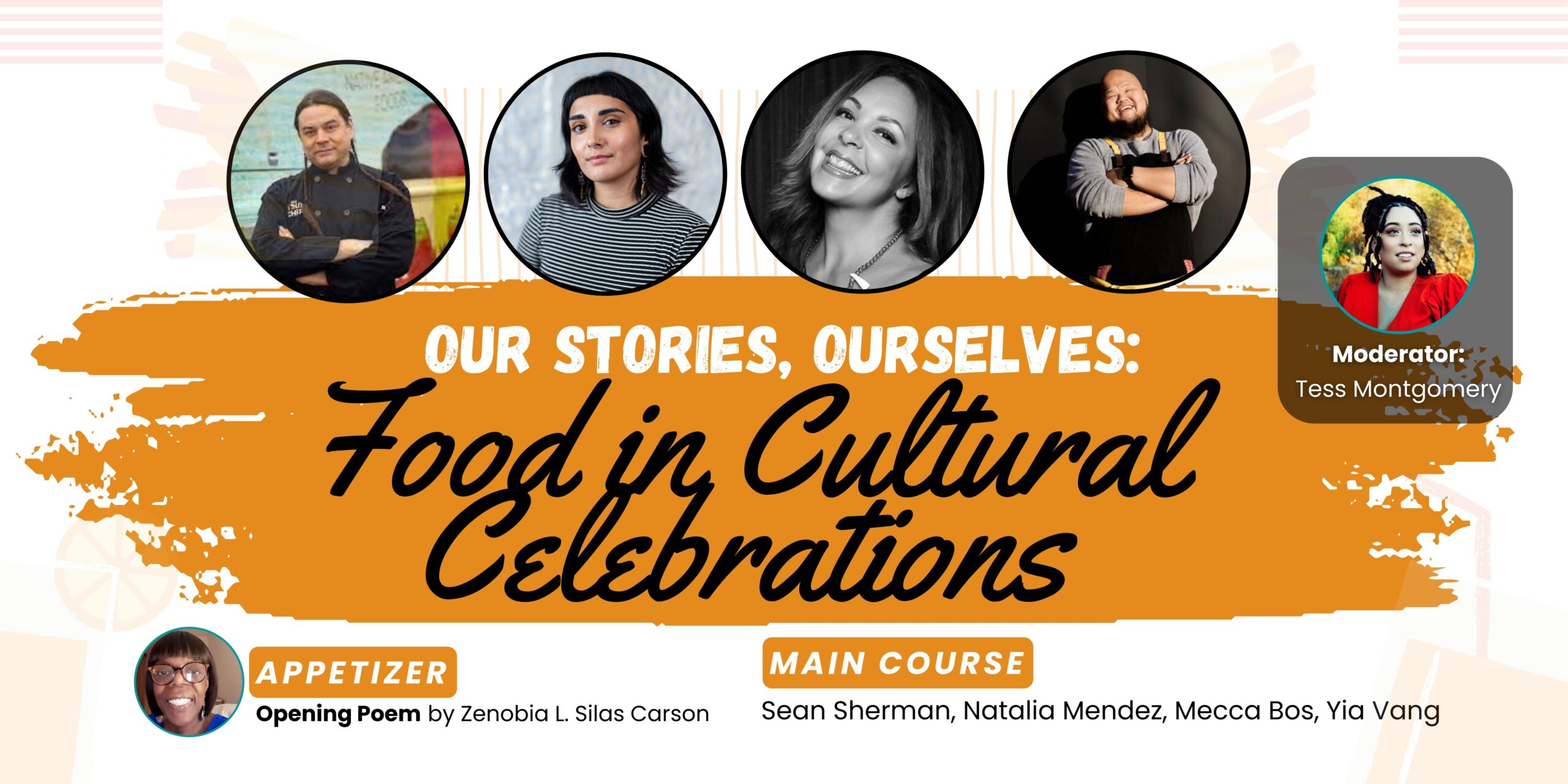 Despite the challenges of the last few years, our communities have always found reasons to celebrate. Join notable chefs and food writers Sean Sherman, Yia Vang, Mecca Bos and Natalia Mendez in a conversation about their communities and the historical and contemporary ways food serves as a backdrop for cultural celebrations.

SEAN SHERMAN, Oglala Lakota, born in Pine Ridge, SD, has been cooking across the US and
the world for the last 30 years. His main culinary focus has been on the revitalization and
awareness of indigenous foods systems in a modern culinary context. In 2014, he opened The
Sioux Chef as a caterer and food educator to the Minneapolis/Saint Paul area. In 2015, in
partnership with the Little Earth Community of United Tribes in Minneapolis, he helped design
and open the Tatanka Truck food truck. In 2021, Chef Sean and Dana Thompson opened
Owamni by The Sioux Chef, a modern Indigenous full service kitchen located in North Loop
Minneapolis, featuring the true foods of North America through an Indigenous perspective.
Sean’s vision of modern indigenous foods has garnered many awards including a number of
awards for his cookbook, The Sioux Chef’s Indigenous Kitchen (Minn2017), and the prestigious
James Beard award which named Owamni the best new restaurant in the United States in 2022. Learn more at sioux-chef.com

YIA VANG is a trained chef and Beard Foundation award finalist who worked at many top
restaurants in the Twin Cities before opening Union Hmong Kitchen. He has been featured in
The New York Times, National Geographic and Bon Appetit, as well as showcased on PBS,
CNN, The Food Network, Netflix’s Iron Chef: The Quest for an Iron Legend, and more. In
2022, he was a semi-finalist for the James Beard Foundation’s Best Chef Midwest award. His
new Minneapolis restaurant concept, Vinai, is named after the refugee camp in Thailand where
he was born. His restaurants create a home for his Hmong cuisine, celebrate his parents’ legacy,
and share the story of his family through food. Union Hmong Kitchen, located in Graze Food
Hall in North Loop Minneapolis, features Hmong culture, stories, rituals, foods and flavors. Vang marries local traditions with those from back home in South and Eastern Asia to bring
Hmong flavors to American palates. Learn more at unionkitchenmn.com

MECCA BOS has been a Twin Cities based journalist and chef for more than 20 years. In these
dual roles, she has become known as one of the leading local voices for marginalized voices in
the food community and has championed and uplifted the stories of people of color, women,
elders, and immigrant communities, putting focus and spotlight on stories that the mainstream
media may have traditionally overlooked or ignored. Mecca has been the dining critic of Twin
Cities Metro and City Pages. Her work has also been published in The New York Times, Taste,
VICE, Paste, Travel + Leisure, Midwest Living, and many other publications. She is a regular
contributor to Minnesota Public Radio, and is producing her own audio documentary work,
“Hidden Black Foodways.” Through the BIPOC Foodways Alliance, Mecca, Sean Sherman, and
their community of allies plan to dismantle white supremacy using food as a tool. Based in the
Twin Cities and around the world, BIPOC Foodways Alliance is dedicated to the documentation,
examination, and promotion of the foodways of all BIPOC communities in the United States.
Learn more at meccaboswrites.com

NATALIA MENDEZ (they/them) is a queer, Chicanx writer and photographer living in
Minneapolis. Finding connections to their roots and with others through food has been a habit
throughout their life. They can also be found around the Twin Cities on two wheels (bicycle or
motorcycle) when they&#39;re not writing about food, entertainment, the outdoors, or experiences on
the margins. Their work is published regularly on their blog with The Current. You can also find
their work on Racketmn.com, Eater Twin Cities, Seward Coop’s website and more. You can find
their work at bynataliamendez.com.

Moderator
TESS MONTGOMERY is a young communicator, a visionary and an avid foodie who lives in
Minneapolis. She has been a Digital Marketing Specialist at TPT-Twin Cities PBS and
Marketing and Communications Manager for More Than a Single Story. She was a 2018 Fellow
with the Josie R. Johnson Leadership Academy, a 2017 Fellow with New Sector Academy, and
served as Programming Chair of Young Nonprofit Professionals Network of the Twin Cities.
Tess is passionate about the power of grassroots, community-led organizing. She holds a degree
in Journalism &amp; Mass Communications from Drake University. In 2019, she was named one of
15 up and coming PR and Social Media Marketers to Watch. Her essay, “Financial Trauma in
Communities of Color” was published in MN Women’s Press in 2020 and in We Are Meant to
Rise: Voices for Justice from Minneapolis To the World (Minn2021).

Opening Poet
ZENOBIA L. SILAS-CARSON a writer/teacher/speaker/Minister and senior life coach.
She is a retired teacher who has worked with Special Needs children at Odyssey Charter School
in Brooklyn Park MN. She has also worked as an advocate at Harriet Tubman Women&#39;s Center
and Incarnation House in Minneapolis Minnesota. Most recently she held positions at Lang Nelson Associates as an office assistant, activities director and exercise coach for senior women.
and leader of several food programs at Creekside Gables which is a 55+ Senior community in
Brooklyn Park Minnesota. She encourages people as a minister and is involved in sharing
resources for food services through Good in the Hood and CEAP within the NW suburbs of
Hennepin County. A native Chicagoan, Ms. Carson remains involved in writing workshops and
enjoys activities with her children, grands and great grandchildren.