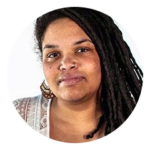 Erin Sharkey is a writer, producer, educator and graphic designer based in Minneapolis. She received her MFA in Creative Writing from Hamline University and is the co-founder of an artist collective called Free Black Dirt. Erin has appeared in publications such as Walker Art Center’s Untitled and Paper Darts. Erin is a 2016/17 Loft Mentor Series winner in creative nonfiction. She was a 2016 VONA/Voices Travel Writing fellow, 2015 Givens Foundation for African American Literature Emerging Writers fellow, a Givens Foundation cultural producer-in-residence as well as a Coffee House Press in the Stacks artist-in-residence at the Archie Givens Sr. Archive at the University of MN.