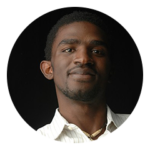 IBé is from Guinea, by way of Sierra Leone where he left abruptly in 1991, the very first day of what turned out to be a 10 years civil war. He has been on the move ever since, hoping to one day find his way back home. In the meantime, he has learned to make home in between the places that have at one point or the other held his mails.

IBé is a writer—a spoken word artist and an essayist with numerous awards to his name; a father of three—they are tasked with doing everything he dreams of but has been unable to achieve partly because he gives them all his time and energy; and an IT Project Manager for a consulting firmed specialized in Microsoft Dynamics 365 implementation