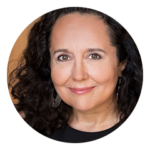 Kathryn Haddad is a writer, teacher, speaker, and community organizer whose work explores contemporary Arab American experiences and reflects on the political reality of life for Arab and Muslim Americans. She founded Mizna – one of the few Arab American Arts and literary organizations in the United States where she served as its Artistic and Executive Director for twelve years. Kathryn is a 2004 – 05 recipient of an Archibald Bush Leadership Fellowship for her work with the Arab American community. As a writer, she received three Playwright’s Center Many Voices Fellowships as well as awards from the Jerome Foundation, the Minnesota State Arts Board, and Intermedia Arts. She was the recipient of the 2018 Kay Sexton Award from the Minnesota Book Awards. Her plays and creative non-fiction have appeared in many venues throughout the United States. Her play, Zafira the Olive Oil Warrior appears in the anthology, “Contemporary Plays by Women of Color”, edited by Roberta Uno. She is the current artistic and executive director of New Arab American Theater Works and teaches high school in Bloomington.