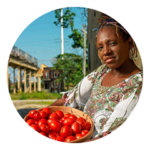 In her Chicago neighborhood, LaDonna Redmond worked to rebuild the urban food system. The citywide grassroots movement led to national conversations about food justice. A long-time community activist, LaDonna Redmond has successfully worked to get Chicago Public Schools to evaluate junk food, launched urban agriculture projects, started a community grocery store and worked on federal farm policies to expand access to healthy food in low-income communities. Redmond is a WK Kellogg Food and Society Policy Fellow and a Green For All Fellow.

In 2009, Redmond was one of 25 citizen and business leaders named a Responsibility Pioneer by Time Magazine. In 2013, she launched the Campaign for Food Justice Now (CFJN). Currently, she is the diversity and community engagement manager for Seward Community Co-op. In that role LaDonna lead an effort to build a natural foods co-op in a historically African-American community in south Minneapolis, the co-op opened in October 2015. LaDonna hosts radio shows, It’s Your Health and Diary of an Urban Food Goddess. Combining art with activism Ladonna curates theater performances called SOUL food monologue. SOUL stands for Sustainable, Organic, Urban, and Local.