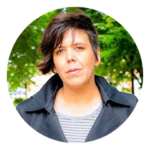 Melissa Olson (she/her/hers) is a mixed-heritage Native cis-woman who makes her living as a writer and producer of independent public media. The daughter of an Ojibwe adoptee, her award-winning audio documentary Stolen Childhoods (on Soundcloud) was produced in collaboration with KFAI producer Ryan Katz and edited by Todd Melby.

She works as a consultant with TerraLuna Collaborative, an art-based developmental evaluation firm. Melissa attended the University of Minnesota as an undergraduate and was a proud recipient of a MacArthur Fellowship in 2003 for her graduate work in American Studies. Melissa lives in Minneapolis with her boyfriend John and their bulldog Bronson. (Photo by Nancy Hauck)