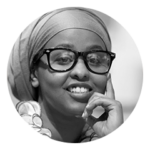 Nimo H. Farah is an artist and activist that uses language to express things she finds too confusing. Her current undertaking is to develop her skills as an orator while blending Somali and English. She thinks herself charming and hilarious in the Somali language, but rarely does
that humor translate into English.

Her poetry and short stories have been published in WaterStone Review, the Saint Paul Almanac, and the Loft Inroads chapter book. As a storyteller she has shared her words at the Black Dog Café, the Loft, and Pillsbury House. She co-founded SALLI (Somali Arts Language & Leadership Institute), a nonprofit organization promoting art and literature in the Somali community. She is a 2014 Loft Spoken Word Immersion Fellow and a 2014 Bush Fellow and a recipient of 2015 Intermedia Arts VERVE grant.