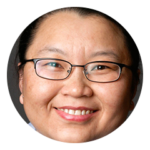 Pakou Hang is the Executive Director and Co-Founder of the Hmong American Farmers Association. Pakou’s childhood was spent picking cucumbers for Gedney Pickles and growing and selling vegetables at the local farmer’s markets. She has over 20 years’ experience with farming and vegetable production and is a former member of the St. Paul Farmers Market Board of Directors as well as a 2011 participant to The White House Project’s Plate to Politics Summit in Wisconsin.

Pakou has worked for over 12 years as a community organizer and graduated from the University of Minnesota in 2008 with a Masters in Political Science and from Yale University in 1999 with a B.A. also in Political Science. She is a recipient of the prestigious Hubert H. Humphrey Public Leadership Award, the Paul and Daisy Soros Fellowship for New Americans, and the newly inaugurated Bush Leadership Fellowship which was the impetus for the formation of HAFA.