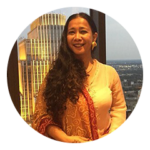 Associate Professor of cultural theory and historiography in the Department of Gender Women & Sexuality Studies, she is also a faculty advisor/ affiliate of the Interdisciplinary Center for the Study of Global Change, and senior affiliate at Asian Literatures, Cultures, and Media. Her book, The Dance That Makes You Vanish: Cultural Reconstruction in Post-Genocide Indonesia (University of Minnesota Press, 2013) theorized cultural reconstruction and embodiment of memory after genocide. she has published articles focusing on de-colonialization and feminist third world tactics in transnationalism and Critical studies of Empire. Her new book project, Dancing in the Forest: Modern Machine and Audio Politics of Land Narrative, interrogates the aesthetic encounter between indigenous voices and capitalist noise within neoliberal space. Her  most recent writings are: “The Rethinking of Remembering: Who Lays Claim to Speech in the Wake of Catastrophe?” Roudledge, 2017; “From Che to Guantanamera: Decolonizing the Corporeality of the Displaced,” Rowman & Littlefield International, Kilombo: International Relations and Colonial Questions); “The  Dancing Goddess: Ecological Memory, Technique, and the Inquiry of Value in Globalized Space,” Smithsonian, Performing Indonesia, 2016; “Theorizing the Archive: Corporealness, Decolonization of Thinking and Tactics, and Playfulness of Memory,” in Kerja Arsip & Pengarsipan Seni Budaya di Indonesia, Farah Wardan & Yoshi Fajar Kresno Murti , IVAA, 2014.

Her most recent international keynote addresses are: “Dancing the Traces  of Empire Between the International  and Speaking of Specificity” (China, 2016); “Reviving Culture for Rural Sustainability” (Sumatra , 2018) and Arts and Sustainability: Land, Forest & Water (World Culture Forum, Indonesia/ UNESCO  2016).