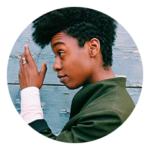 As a dependent of two young military parents, Taylor Seaberg spent her childhood traveling the world. She was born in Germany during the second Gulf War. She spent much of her upbringing in the Mediterranean and various European countries. Her family moved sporadically at the will of the US Armed Services and her stepfather’s deployment (every 2 years to be exact). Because of this, she never had an opportunity to deeply know or appreciate the historical value of the places she lived beyond their romanticized aesthetics. However, she was heavily immersed in the music world due to her mother who was a mezzo-soprano, opera singer of Kenyan and Indian descent. Taylor now considers herself a nomadic musician with a passion for jazz stylings and hip-hop.