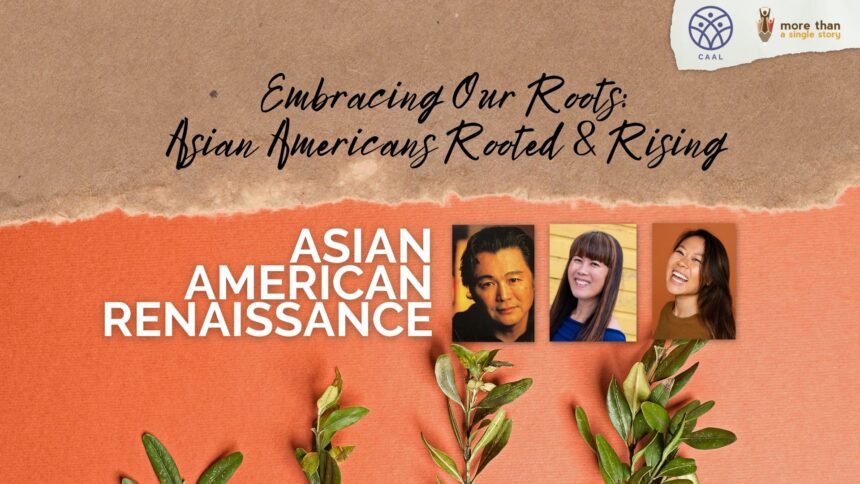 We are excited to announce a new strand in our Embracing Our Roots series: Asian Americans Rooted & Rising! For our first event in this sub-series, we have Asian Rennaissance:

On Thursday, May 19th More Than a Single Story and the Coalition of Asian American Leaders (CAAL) invite you to join us for a virtual intergenerational conversation between Asian Minnesotan artists David Mura, Katie Hae Leo and Julia Gay as they honor the 30th anniversary of the Asian American Renaissance and discuss how our history of arts organizing has shaped the current landscape of AAPI movement in Minnesota. Why was the Asian American Renaissance so significant for our community and what should we be dreaming up next?

With the rise in hate crimes against Asian Americans, sharing knowledge intergenerationally is more important than ever. Embracing our Roots: Asian Americans Rooted and Rising reaches back into the rich history of Asian American social justice movements in Minnesota in order to pass this knowledge on to the new generation ascending as leaders. The series features Asian elders in conversation with young leaders to discuss significant milestones in Minnesota’s Asian history and the impact that the artists and the movements have had on our present day capacity to survive the storms and keep creating.

This event in Embracing Our Roots: Asian Americans Rooted and Rising is a partnership between More Than a Single Story and the Coalition of Asian American Leaders (CAAL)

David Mura’s latest book is on creative writing and race, A Stranger’s Journey: Race, Identity & Narrative Craft in Writing. With essayist Carolyn Holbrook, Mura is co-editor of an anthology of Minnesota BIPOC writers, We Are Meant to Rise: Voices for Justice from Minneapolis to the World. His next book is The Stories Whiteness Tells Itself, a collection of essays contrasting historical and fiction narratives by white Americans and African Americans, appearing fall 2022.

In 2021, for Twin Cities Public Television, Mura co-produced, wrote and narrated the documentary, Armed With Language, about the Japanese American linguists who served in the Military Intelligence Service during WWII. Armed With Language won a 2021 Upper Midwest Emmy.

A Sansei or third generation Japanese American, Mura has written two memoirs: Turning Japanese: Memoirs of a Sansei , which won a 1991 Josephine Miles Book Award from the Oakland PEN and was listed in the New York Times Notable Books of Year, and Where the Body Meets Memory: An Odyssey of Race, Sexuality and Identity . His novel Famous Suicides of the Japanese Empire was a finalist for the Minnesota Book Award, the John Gardner Fiction Prize and Virginia Commonwealth University Cabell First Novelist Award.

Mura’s latest collection of poetry is The Last Incantations. His second, The Colors of Desire, won the Carl Sandburg Literary Award from the Friends of the Chicago Public Library, and his first After We Lost Our Way was a National Poetry Contest winner.

Katie Hae Leo (she/her) was born in Bucheon, South Korea and raised in Indiana. Her creative work explores the multiple intersections between the adopted body and notions of race, gender, place, home, and (dis)ability. Her poetry and essays have appeared in journals such as Asian American Literary Review, Kartika Review, and Water~Stone Review. She has performed in venues such as Theater Mu, Dreamland Arts, Asian Arts Initiative (Philadelphia), Phoenix Art Museum, and University of Regina (Canada). Her awards include the James Wright Prize for Poetry, a Gesell Award for nonfiction, and a Spark Leadership Award from the Coalition of Asian American Leaders. Katie is currently working on a young adult novel, initially supported by a Mirrors and Windows Fellowship for Indigenous writers and writers of color working in youth genres, from The Loft Literary Center. She is honored to be part of this conversation.

Julia Gay (she/they) is an artist and community organizer committed to uplifting the intersections of justice, healing and the arts. She is currently the Communications & Marketing Manager for the Coalition of Asian American Leaders (CAAL) and the host of their newly released MinneAsianStories Podcast.

Outside of the office, Julia is a dancer, playwright and stand-up comedian. She was a dancer with professional company Ananya Dance Theatre from 2016-2021 and is currently a steering committee member for the Network of Politicized Adoptees. In October 2019, Julia produced her one-woman show, Motherlanded, exploring her personal narrative as a Chinese adoptee. Learn more about her artistic work at www.juliagay.com.