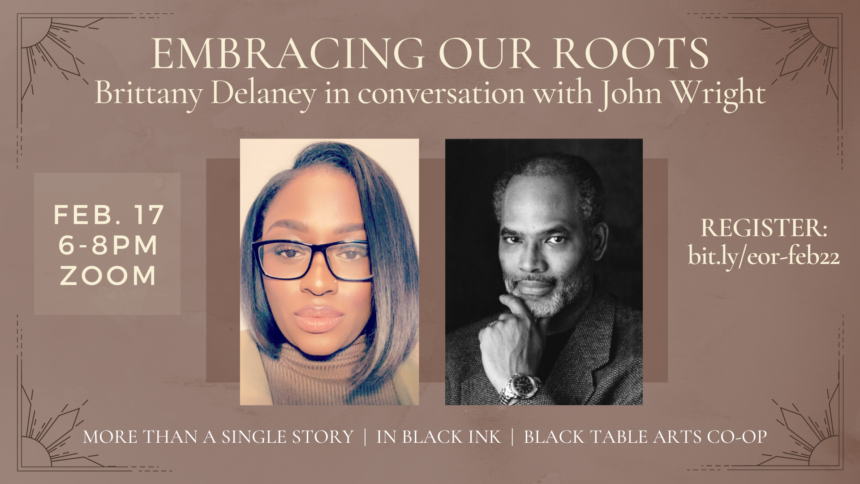 After the uprisings for George Floyd and Daunte Wright, sharing knowledge inter-generationally is more important than ever. Join us for monthly conversations where young arts leaders will join our elders and culture bearers in conversation about their histories of significant milestones in Minnesota’s Black literary history,

On Thursday, February 17, 2022, Spoken Word Artist/Arts Educator, Brittany Delaney will join Distinguished Professor Emeritus John S. Wright in a conversation about Dr. Wright’s storied career at the U of M beginning with his leadership of the Morrill Hall takeover in 1969 when he was an undergrad – the event that led to the founding of the African American Studies program. They will also discuss his role in the acquisition of The Givens Collection of African Literature which holds over 10,000 books, magazines, and pamphlets by or about African Americans, and the performative history of the traveling multimedia “Langston Hughes Project — Ask Your Mama: Twelve Moods for Jazz” that he created and toured the country with beginning in the 1990s.

ABOUT THE FEATURED WRITERS:

John S. Wright is Morse-Amoco Distinguished Teaching Professor Emeritus of African American & African Studies and English at the University of Minnesota. When he was a graduating senior and member of the Afro-American Action Committee at the U of M, he wrote the Seven Demands that led to the 1969 Morrill Hall Takeover, the founding of the University’s Department of Afro-American & African Studies and its Martin Luther King Program, which he subsequently administered from 1971-73. He was twice appointed a Research Associate at Harvard’s W. E. B. Du Bois Institute (1982 & 1991); and joined its Working Group on Black Intellectual History from 1991-93.  In 1991 he served as Scholar in Residence at the Schomburg Research Center in Harlem. Wright spearheaded the acquisition of the Archie Givens, Sr. Collection of African American Literature and Life in 1985, and served as its Faculty Scholar while leading Givens Collection teacher training seminars and community outreach projects for two decades. His artistic work includes the multimedia “Langston Hughes Project — Ask Your Mama: Twelve Moods for Jazz” that he created and began touring in the 1990s.

Brittany Delaney is a Spoken Word Artist/Arts Educator born and raised in Minnesota. She has been performing on the scene for 18 years after getting her start in Slam Poetry. Brittany has participated in Spoken Word groups such as The Minnesota Spoken Word Association, Quest for the Voice, Brave New Voices (HBO),Teens Rock the Mic and various Slam organizations. She’s facilitated poetry workshops in university-based establishments across the country and is currently contracting as a Curriculum Consultant for various school districts across the United States. She continues doing residencies, diversity training, and tours. Her focus is promoting literacy, inclusion, and safe space learning environments through culturally responsive (and responsible) curriculum and practices.

Embracing our Roots is a partnership with More Than a Single Story, Black Table Arts and In Black Ink.