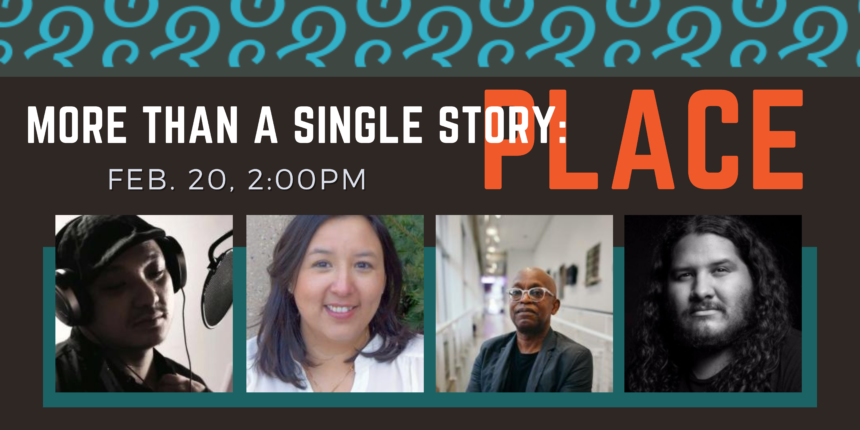 More Than A Single Story: Place

The Loft continues its collaboration with More Than A Single Story with a discussion centered around place. What does location—the block, the protest site, and so forth—have to do with art? And what can art do in those spaces? This panel brings together a diverse panel of artist activists who engage with art making in community space: Mark Tilsen, Tou Saiko Lee, Seitu Jones, and Angela Two Stars.

This event is co-sponsored by The Loft Literary Center.

Tou SaiK Lee is a rhyme writer who flows over drum loops, a poet loralette appointed by O.G.s of community organizing in St. Paul. Lee was the Multicultural Movement Builder for the Frogtown Neighborhood Association connecting underrepresented communities to resources and leadership opportunities. He collaborated with Karen and Karenni refugees to create a gang and substance abuse prevention program for Southeast Asian youth called AYO (Asian Youth Outreach).

Angela Two Stars is a public artist and curator. She is the director of All My Relations Arts, a project of the Native American Community Development Institute in Minneapolis, MN. Angela is an enrolled member of the Sisseton Wahpeton Oyate and received her BFA from Kendall College of Art and Design. Angela’s public art commissions include; Zaniya Yutokce at Bde Maka Ska, and Okciyapi at the Minneapolis Sculpture Garden, as well as additional works within the Twin Cities.

Seitu K Jones is a multidisciplinary artist, advocate and maker based in St. Paul, Minnesota. Working between the arts and public spheres, Jones channels the spirit of radical social movements into experiences that foster critical conversations and nurture more just and vibrant communities from the soil up. He is recognized as a dynamic collaborator and a creative force for civic engagement.

Mark K. Tilsen is an Oglala Lakota Poet Educator from the Pine Ridge Indian Reservation. He comes from activist families long steeped in the struggle for liberation for all people and the long term survival of the Lakota Nation. At Standing Rock he stepped into the role of a direct action trainer and police liaison. Those stories have been compiled into a book of poems titled It Ain’t Over Until We’re Smoking Cigars on the Drillpad. During the pandemic Tilsen has worked with Camp Mniluzahan providing shelter for unhoused relatives in on Lakota land near Rapid City SD.