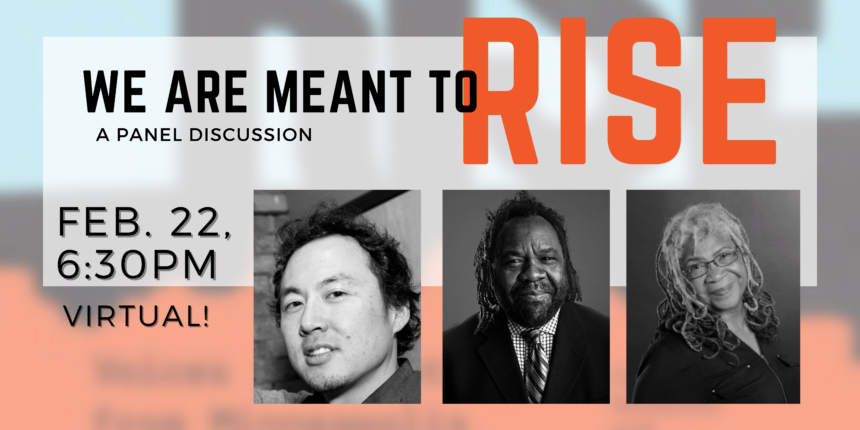 Winter Reads: We Are Meant to Rise Panel Discussion

Carolyn Holbrook, Ed Bok Lee, and Alexs Pate will read from and discuss their writing in the powerful new book, We Are Meant to Rise: Voices for Justice from Minneapolis to the World (University of Minnesota Press, 2021). This collection features Indigenous writers and writers of color discussing racism in Minnesota, including in the context of the COVID-19 pandemic and after the murder of George Floyd.Join us virtually as we hear from these powerful voices about their writing and experiences.

Buy the book here.
—
About the panelists:
ALEXS PATE is a writer, novelist, Founder of Constructing the Innocent Classroom, and the President and CEO of Innocent Technologies, LLC, a company he founded to end educational disparities by closing the relationship gap between educators and students of color. Alexs is the author of five novels, including Amistad which was commissioned by Steven Spielberg’s Dreamworks/SKG and based on the screenplay by David Franzoni, which became a New York Times Bestseller. His other novels are Losing Absalom, Finding Makeba, The Multicultiboho Sideshow, and West of Rehoboth.
ED BOK LEE is the author of three books of poetry, most recently, Mitochondrial Night (Coffee House Press, 2019). Lee is the son of North and South Korean emigrants—his mother originally a refugee from what is now North Korea; his father was raised during the Japanese colonial period and Korean War in what is now South Korea. Honors include an American Book Award, a Minnesota Book Award, an Asian American Literary Award (Members’ Choice), and a PEN/Open Book Award.
CAROLYN HOLBROOK is a writer, educator, and longtime advocate for the healing power of the arts. Her memoir in essays, Tell Me Your Names and I Will Testify (U of M Press, 2020) won the 2021 Minnesota Book Award for memoir and nonfiction, and was an honoree for the 2021 Society of Midland Authors Literary Award in Biography & Memoir. She is a co-author with Arleta Little of MN civil rights icon, Dr. Josie R. Johnson’s memoir, Hope In the Struggle. Her personal essays have been published widely, most recently in A Good Time for the Truth: Race in Minnesota and Blues Vision: African American Writing from Minnesota (both from MNHS Press). She is the Director of More Than a Single Story, which she founded in 2015.
+ Google Calendar+ iCal Export